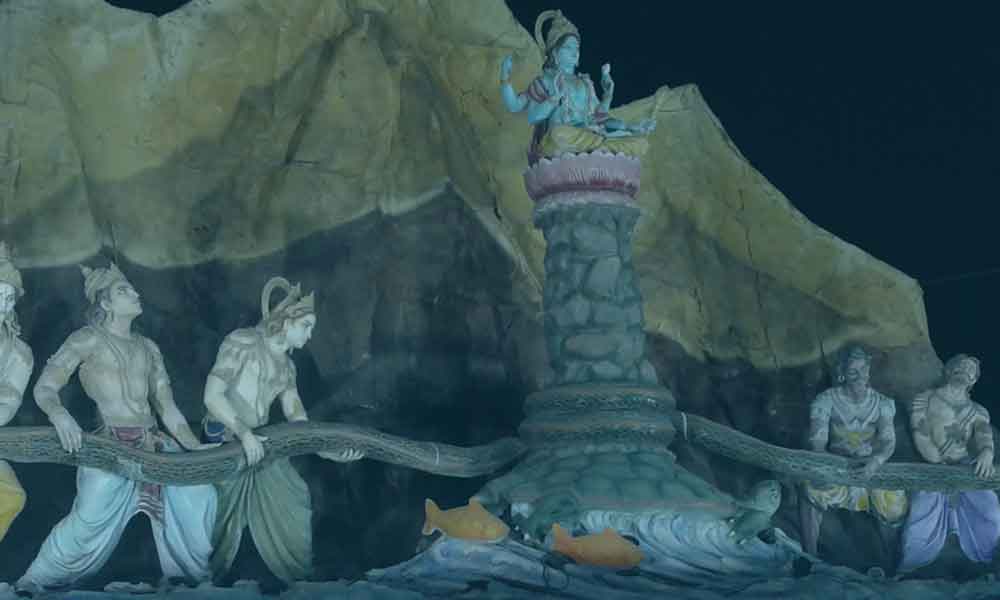 Sagar Manthan The Churning of Oceans

An account of the churning of the oceans (sagar manthan) by devas and asuras (gods and demons) for elixir and how Shiva drank the poison to save the world. From the Hindu Puranas.

The Asuras were older than their half-brothers the Gods. They acquired great possessions in the three worlds, but because they did not sacrifice to each other, because they did not visit holy places, they did not acquire great powers within themselves. But the Gods who did not have great possessions went on making sacrifices, went on dealing truthfully with each other, went on visiting holy places until they had greater and greater powers within themselves.

The Gods and the Asuras knew that they could gain the Amrit, the Water of Life, if they churned up one of the seven oceans that, ring beyond ring, encircles the worlds. They came down to the Ocean of Milk. They took the Mountain Mandara for a churning-pole and the hundred-headed serpent Vāsuki for a churning-rope. They wound the serpent around the mountain, and pulling it this way and that way they splashed and dashed the, Ocean up and down and to and fro. And the Ocean of Milk frothed and bubbled as they churned.

For a thousand years the Gods and the Asuras churned the Ocean of Milk. All that time Vāsuki, the serpent, from his hundred heads spat venom. The venom bit into the rocks and broke them up; it flowed down, destroying the worlds of Gods and men. Then all creation would have been destroyed in that flood of venom if it had not been for the act of one of the Gods.

Shiva took up the venom in a cup and drank it. His throat became blue with that draught of bitterness. But by his act, the Gods won to more powers than the Asuras had.

Still they churned. Then out of the Ocean of Milk came the wish-bestowing cow, Surabhi. Gods and Asuras rejoiced at the prosperity that came with her. Then appeared the Apsarases, the heavenly nymphs, and the Gods and the Asuras sported with them. The moon was churned up, and Shiva took it and set it upon his forehead.

But now the Asuras wearied in their toil, and more and more they sported with the Apsarases. The Gods, their powers increased through Shiva's deed, laboured at the churning, and the whole Ocean of Milk foamed and bubbled. Then was churned up the gem of gems, Kaustubha, and then white Uccaibhsravas, the best of steeds.

Now the Gods grew in strength as they laboured, and they laboured as they grew in strength, while the Asuras abandoned themselves more and more to pleasures, and they fought amongst themselves on account of the pleasures that all of them sought. And then, seated on a lotus and holding a lotus in her hand, a lovely Goddess appeared. She went to Vishnu; she cast herself on the breast of the God, and, reclining there, she delighted the Gods with the glances she bestowed on them. All knew her for Shrī, the Goddess of Good Fortune. And the Asuras, in despair because Good Fortune had gone to the side of the Gods, stood around, determined to seize by force the next good thing that came out of the churning.

And then, behold! there appeared the sage Dhanvantari, and in his hands was the cup that held the Amrit, the Water of Life. The Asuras strove to seize it; they would drink it all themselves, or else they would fling the Amrit where the serpent's venom was dripping on the rocks. Almost they overpowered the Gods in their efforts to seize the Amrit. Then Vishnu changed himself into a ravishing form; he seemed to be the loveliest of the nymphs of Heaven. The Asuras went towards where the seeming nymph postured for them. Even then they fought amongst each other. And the Gods took the cup, and, sharing it, they drank of the Amrit.

And now they were filled with such vigour that the Asuras could not overpower them. Many they drove down into hell where they became the Daityas or Demons. That was the beginning of the wars between the Gods and the Daityas--the wars that went on for ages.

The Gods were triumphant and the three worlds became filled with radiance and power. Indra, king of the Gods, seated upon his throne, made a hymn in praise of Shrī. She granted him his wish, which was that she should never abandon the Gods.

And so they lived upon that most holy mountain which is round like a ball and all made of gold. The birds there have golden feathers. Indra stays there. The steed which he gained at the Churning of the Ocean grazes near him. Beside him is his thunderbolt winged with a thousand plumes: Tvastir made it for him from the bones of the seer Dadhica: it is hundred-jointed, thousand-pointed. With the thunderbolt is his spear and his conch. Vishnu is near. But he broods upon the waters, resting upon a serpent, and Shrī, his bride, is beside him and over him the bird Garuda hovers.

Shiva dwells in a lovely wood that is filled with flowers. Near him is the spear with which he will destroy the worlds at the end of an age. And beside him is his bow, his battle-axe, and his trident. Once, in jest, his wife Umā covered Shiva's eyes with her hands. Then was the world plunged into darkness, men trembled with fear, and all that lived came near to extinction. But to save the world a third eye appeared in Shiva's forehead: when it blazed forth the darkness vanished, men ceased to tremble, and power once more pervaded the worlds. And always Shiva's throat will be blue from the bitterness of the venom that he drank when he saved creation. Above the most holy mountain is the golden palace of the Lord of All-Brahma--a palace that is built on nothing that is substantial.

Source: From The Orpheus Myths of the World by Padraic Colum Illustrations by Boris Artzybasheff [1930, copyright not renewed]. Image: The image of samudra manthan used in this article is licensed under the Creative Commons Attribution-Share Alike 4.0 International license.