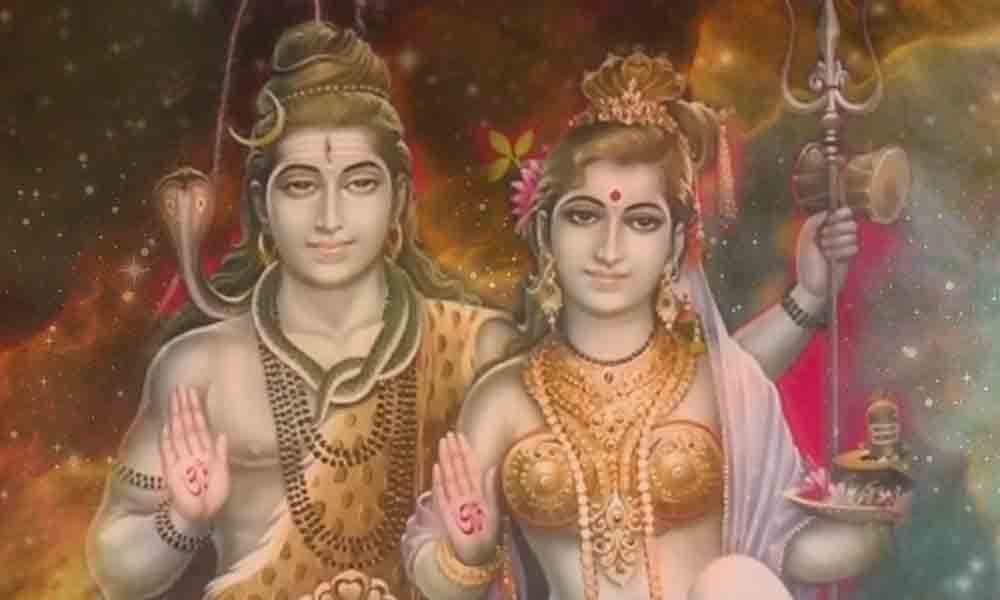 Shakti is the dynamic aspect of creation. She represents force, energy, movement, transformation and associated powers. There are many aspects, forms and names of shakti who is the mother of all. In creation she distinguishes herself, or through the will of Siva, into three basic aspects. This essay presents a brief account of Shakti in Shaiva traditions.

Shakti is the dynamic power of Siva through which he manifests the worlds and their myriad objects and beings. Monistic schools of Saivism believe that shakti is inseparable from Siva just as heat from fire, light from the sun, night from the sky or a reflection from the mirror. They also believe that Siva is both the efficient and material cause of creation. Shakti is manifested by Siva only during creation and is withdrawn into himself at the end of creation. He brings forth the worlds and their beings through his will and dynamic energy.

The dualistic schools contend that Siva and Shakti are eternally separate entities though in their purest state they may be of the same essence. Siva is only the efficient cause while shakti is the material cause. Siva initiates creation through his will, using a preexisting shakti or prakriti which is independent of him, and employs her to manifest the 36 tattvas and the triple qualities and through them the whole material universe.

Followers of Shaktism go one step further and believe that shakti is the absolute being, mother of the universe and that Siva by himself is inactive and static. He becomes active only when united with shakti. Shakti is responsible for all creation while Siva remains in the background established in her like a witness consciousness.

Popular tradition symbolizes the unique relationship between Siva and Shakti in the form of Ardhanariswara, which means half female and half God. One half of it belongs to Siva and the other half to Parvathi or the mother goddess. This is an iconographic representation of Siva and Shakti as two distinct yet not distinct (bheda-abheda) entities.

According to the advaita vedanta of Sri Shankaracharya, the world in which we live is unreal and only Brahman is real. Monistic schools of Saivism differ from the advaita philosophy in this regard because they consider the worlds as well as shakti, who is instrumental in their creation, are all real because that (Sadasiva) which is true (satyam), pure (sivam) and perfect (sundaram) cannot create anything that is unreal (asatyam). Siva, shakti, all the tattvas and beings and objects that are created out of them are real. They may be impermanent but real. The beings may suffer from delusion due to the act of concealment by Siva, but they are real entities who actually experience delusion not in some dream state but in their egoistically conscious state.

The Five Supernatural Powers of Shakti

There are many aspects, forms and names of shakti who is the mother of all. In creation she distinguishes herself, or through the will of Siva, into three basic aspects:

In the texts of Saivism we also find a reference to five supernatural powers of shakti, awakened in himself by Siva. Their permutation, combination, concealment and manifestation is believed to be responsible for the multiplicity, plurality, diversity and duality of the beings and objects and their forms and shapes in the manifested worlds. The five aspects of shakti manifested by Siva are:

Siva unleashes these five powers in the beginning of creation and withdraws them back into himself at the time of dissolution. In between he employs these energies for the purposes of creation (srishti), preservation (sthithi), samhara (destruction or modification), concealment (tirobhava) and revelation (anugraha).

Manifestation of the Higher and Lower Worlds

Maya-shakti is the veiling power of Siva. Siva uses this aspect of his shakti to conceal or reveal his powers. Depending upon the degree to which these powers are revealed or concealed, the world order or the divine order becomes established. Shakti is also known as mula prakriti or primal energy. In creation this primal energy is divided into 36 tattvas or principles, of which some are pure and some are impure.

In the creation of higher worlds and their beings (adhikara-muktas) Siva uses five pure tattvas. He also manifests himself completely, or almost completely, without concealing his supreme state. The five pure tattvas are siva-tattva, shakti-tattva, sadasiva-tattva, isvara-tattva and suddha-vidya-tattva. In these planes Siva and his shakti are inseparable and almost indistinguishable. These are the planes of supernatural gods, whose consciousness and will work together in perfect harmony producing instantaneous results upon mere will. In these worlds maya-shakti is pure, inconsequential and ineffective.

In the lower worlds or planes, the distinction between Siva and his shakti becomes more pronounced. In the gross beings with physical bodies and gross objects we find the purpose of creation being finally met. As Siva manifests himself in these planes through his power or shakti, we see a gradual withdrawal or concealment of his supernatural powers and his supreme state. In these worlds he employs the impure tattvas to createthe bonds or impurities in the beings and subjects them, through maya shakti, to the goals of creation. Though these beings are the same as Siva in their true state, because of the impurities they experience the limitations of kaala (time), vidya (knowledge), raga (emotion), niyathi (space) and kala (capacity and skill). Because of the ignorance arising out of these limitations, they also become bound to the impurities of anava (egoism), maya (ignorance) and karma (action with consequences).

According to Vira Saivism Para Siva or the transcendental Siva splits himself into linga and anga. He also divides his energies also into kala (skill) and bhakti (devotion). Kala is responsible for the orderly existence (preservation) of the worlds while bhakti is responsible for the liberation of the souls from their impurities (through destruction and grace) and their self-realization.

It is a matter of opinion whether the worlds are manifested by shakti or by Siva through his shakti. In reality they are inseparable. The notion of their separation from our perspective is because of our limited consciousness. Even in our limited existence our energies are not separate from us. Modern science accepts the notion that matter and energy are interchangeable. So does consciousness and energy and individual will and consciousness and individual will and energy. In the highest planes they are interchangeable, which is why we see a great incongruence between our spiritual experiences and the external reality. It also explains why in the higher metaphysical realms and subtle planes of our consciousness the physical laws of our universe lose their validity.

Creation is a process of issuing forth (expansion) and then withdrawal (contraction). Creation begins with the manifestation of higher and subtler planes and then proceed to manifest the lower and grosser lower planes. The jivas of the lower worlds have the powers concealed in them, which they can awaken to begin their journey of involution. They can accomplish this through spiritual practice, withdrawing from the world (samsara), overcoming their impurities (malas), freeing themselves from their bonds (pasas), releasing their shaktis from the five limitations discussed above and becoming one with their highest consciousness in a state of samadhi. This is the purpose of the whole creation and these are the rules of the game enforced by Siva for his own amusement.