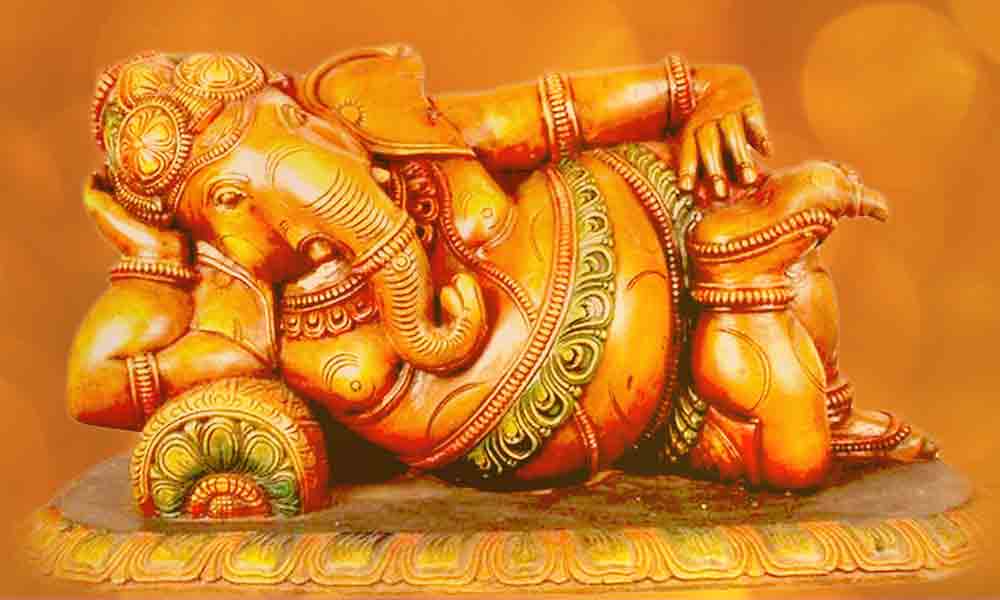 Many people look at the Gods as mere symbols, representations of forces or mind areas. Actually, the Gods are beings, and down through the ages ordinary men and women, great saints and sages, prophets and mystics in all cultures have inwardly seen, heard and been profoundly influenced by these superconscious, inner-plane, inner-galactic beings. Lord Ganesha is just such a being. He can think just as we can think. He can see and understand and make decisions -- decisions so vast in their implications and complexity that we could never comprehend them with our human faculties of limited understanding. Loving Ganesha 1

Ganesha is one of the most popular gods of Hinduism. He is the Hindu version of the son of God. There is also a theory that he manifested upon earth as the Buddha, the lord of intelligence (buddhi), by which he is known. Ganesha means lord of the ganas. Gana means a group or community and isa means lord. Ganesha is the leader of the community of Hindu gods. Ganesha is also the first deity who awakens in our spiritual meditation and guides us on our paths. He is the lord who leads us on uncharted paths in our spiritual journey, riding upon our fears and doubts, and the teacher (guru) who removes darkness from our minds.

Lord Ganesha is worshipped by almost every Hindu. Ganesha's statues and sculpture are found almost in every temple, village and household. His very form shatters our preconceived notions, rigid beliefs and habitual thoughts as he represents singularity amidst diversity. In Hindu rituals and worship, Ganesha is invariably worshipped first. We know Ganesha by many names of which Vighnaraja is one because he is the lord of obstacles. 2 He also removes them when he deems fit. So devout Hindus worship Ganesha before starting any new venture or project.

Historically speaking, the worship of Ganesha dates back to prehistoric times. In the ancient world he was probably worshipped for the protection of farmlands against wild elephants and the menace of rats. The Ganapathi-Brahmanaspati and the Maruts of the Rigvedic hymns have some aspects of Ganesha. Brahmanaspati is Indra's lovely friend, who is known for his knowledge, wisdom and leadership, gives wisdom, heals diseases, increases agricultural wealth, and protects people from their enemies. As the teacher of gods or the priest of heaven, who makes the oblations to prosper, Ganesha occupies an important place in Vedic rites and rituals. Without him no sacrifice is supposed to be complete. There is also a reference to the elephant in his descriptions as an epithet. The Maruts are known for their fierce form and destructive nature. They send rains to the earth and cause fierce storms. In Ganesha we can see a fine integration of the qualities of an excellent teacher and a fierce warrior.

From the copious references available in the Puranas such as the Skanda, Padma, Vamana, Brahmanda, Varaha and Mudgala puranas, we can estimate the extent of Ganesha's popularity even in earlier times. Historians believe that a prototype of Ganesha was worshipped in prehistoric times outside the Indian subcontinent in such faraway places as Afghanistan, Tibet, Mongolia, China, Java, Iran, Cambodia, Borneo, Japan and Mexico. Images of Ganesha were found in Afghanistan and also in Iran. The image of Ganesha found at Luristan in Iran dates back to 1200 BC to 1000 BC. Many Ganesha type idols were also found in Mexico from excavations and ancient temple ruins.

If we go by the iconic representation of the elephant in the early Buddhist sculpture and representation of the Buddha as an elephant, in some schools of Buddhism, the Buddha was probably considered a reincarnation of Ganesha. This is also corroborated by the details which are associated with the birth of the Buddha, and the fact that Ganesha personifies intelligence (buddhi) which is the cornerstone of Buddhist doctrine and philosophy.

Ganesha was popular in both China and Japan centuries ago because of his association with Buddhism. Buddhism easily integrated Ganesha into their pantheon just as they admitted many other Hindu deities with same names but different status. The early Buddhists who went from the Indian subcontinent to spread Buddhism in other countries introduced Ganesha to the followers of the Buddha in China and from there the tradition moved to Japan. Subsequently in both China and Japan Ganesha gained popularity as a god who brought romance and good luck into people's lives. According to Buddhist tradition the Buddha himself revealed a mystic mantra called Ganapathihrdaya to his close disciple Ananda at Rajagriha. Followers of the Mahayana Buddhism allotted a specific place for Ganesha in their drawings of Mandalas or mystic diagrams. In China as well as in Japan, Buddha was worshipped in two forms. One was the traditional Ganesha with the usual and familiar appearance and the other was a two faced Ganesha standing opposite to each other. The laughing Buddha who became popular in China shares some physical features with Ganesha and is also associated with good luck and good fortune.

Ganesha in the Subtle Planes

Followers of Saivism believe that Ganesha sits in the muladhara chakra, at the base of the spinal cord and facilitates the spiritual progress of human beings. Sitting in the muladhara chakra he serves as the gateway to the higher chakras and higher planes of consciousness. Ganesha is a lovable and affable god, who is easily accessible through prayers, meditation and contemplation. He is easy to please and approach because he is resides in the subtle worlds closers to our earth plane (physical body) and serves as a connecting link between this world and the higher. According to Shakti Tantra, there are as many Ganeshas in the creation as there the letters of the alphabet. This suggests that Ganesha exists in various planes and worlds as the head of the ganas or groups of entities to guide them and lead them towards Siva, the primordial being.

Ganesha has a grotesque form. He is depicted with an elephant head, pot belly, short plump hands and legs, a curved trunk, and four arms, one holding a noose, one holding a goad , one giving blessings and boons (varada) and one offering protection (abhaya). He is invariably shown in the company of his vehicle, a small rat happily seated at his feet and surrounded by savory food. His grotesqueness is a symbolic reminder of the fact that in our world appearances are illusory and that truth is always other than what it appears to be. Hidden within that grotesque form is a great soul of universal dimensions, the son of God (Siva), known for his knowledge, wisdom, kindness, valor and leadership. There are many stories about his origin, his adventures and mischievous pranks. The most widely accepted legend is that he was created by Parvathi, the mother goddess to assist her in her duties and was later elevated by Lord Siva, after subjecting him to some rigorous tests, as the leader of the gods. Ganapathi was originally a bachelor god. But with the rise of Shaktism in India, his shaktis began to appear along with him in his images and descriptions. His shaktis are two, variously known as Siddhi and Riddhi or Buddhi or Pusti. 3 In some modern images we also see him as Laskhmi Ganapathi, seated along with goddesses Lakshmi and Saraswathi instead of Siddhi and Riddhi. Some of the symbolism associated with Ganesha is shown in the following table:

The idols and temples of Ganesha are found all over the world. We we have archeological evidence to suggest that he was worshipped in some temples of northern India as early as first century AD. The Ganapatyam lists 32 iconic forms of Lord Ganesha of which 16 are considered to be the most popular. They are not different Ganeshas but personification of his various aspects and attributes. There are idols and images of Lord Ganesha corresponding to these 16 forms. In each aspect Ganesha is shown with specific color, shape, posture and a variety of objects in his hands. Ganapathi is also symbolically worshipped in the form of a kumbha consisting of a coconut sitting atop the mouth of a round pot or vessel surrounded by five mango leaves. In some places Ganesha is worshipped in the form of lingas, salagramas and yantras. The swastika is also considered to be a symbol of Ganesha because he is a god of luck and auspiciousness. The sixteen forms of Ganesha are shown below:

Traditionally the state of Maharashtra in India is well known for the worship of Lord Ganesha and houses eight of his very famous temples knows as Ashtavinayaka temples. Some details of these temples and their idols are mentioned below

Ganesha is usually worshipped alone. But in the tantric form of worship he is worshipped along with his shaktis as Vallabha. The puranas mention 16 names of Ganesha which are considered to be effective during his worship for warding off evil and gaining his blessings. These names are also used in the prayers addressed to Ganesha during his worship. The 16 names of Ganesha are: sumukha, ekadanta, kapila, vighnaraja, vinayaka, dhumaketu, ganadhyaksha, phalachandra, gajakarna, lambodara, vikata, vakratunda, surpanakha, heramba, skandapurvaja and mahaganapathi. Ganesha is also worshipped as the supreme Brahman himself by the followers of Ganapatya Sect

Some rare and interesting aspects of Ganesha are found in some temples of India such as the the image of Bala Ganapathi crawling on his hands like a baby at Vellore in Andhra Pradesh, the image of Ganesha holding a flute just like Krishna at Madurai, a female aspect of Ganesha called Ganeshini at Suchindra and Madurai and a five headed Heramaba Ganapathi riding a lion at Nagapattinam. The female aspect of Ganesha is also called Vinayaki, Surpakarni and Lambamekhala.

3. These shaktis denote his unlimited wisdom (buddhi), his power to grant health (pusti), wealth and boons (siddhis) and his power to